President Jeffrey J.P. Tsai of AU signs MOUs with prestigious and historical universities in Europe, including University of Bologna in Italy, Complutense University of Madrid, and RCUEMC in Spain. 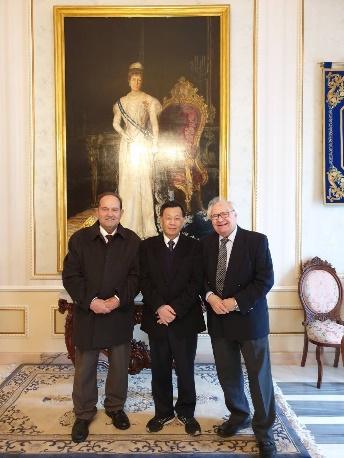 Rector Marceliano Arranz Rodrigo of RCUEMC (left) and Father Agustin Alonso Rodriguez (right) led President Jeffrey J.P. Tsai (center) of AU for a campus tour AU is devoted to education internalization, and has been engaging actively in establishing relations with renowned universities worldwide. Asia University currently has 15 dual degree programs for both undergraduate and graduate students with our partner universities in UK, USA, Switzerland, Indonesia, and other countries around the globe. In world ranking performance, the Times Higher Education (THE) Young University Rankings 2018: Millennial Universities, AU was ranked the 31st in the world, making us the 1st place in Taiwan In cutting-edge research initiatives, AU has established itself as a top-notch research institution that will lead the world by adopting emerging technology. Our research centers include the AI Research Center, the Center for Precision Medicine Research, Intelligent Assistive Technology and Rehabilitation Innovation Center, the Institute of Innovation and Circular Economy, the Eye Center, the Big Data Research Center, the Center of Fintech and Blockchain Technology, the Food Safety and Inspection Center, the 3D Printing Medical Research Institute, and the Center for Prevention and Treatment of Internet Addiction. All of these research centers aim to elevate the learning achievements of students and their real-world problem-solving abilities to a higher level. Other than the focuses on internationalization and research development, aesthetic education is also well embedded in students’ daily life by having the Asia Museum of Modern Art designed by Tadao Ando on campus. As a legendary landmark in central Taiwan, the museum has become a venue for world-class exhibitions. Another contribution to the community, the Asia University Hospital aims to deliver the best care in a safe and compassionate environment and to provide health and well-being to the community we serve. 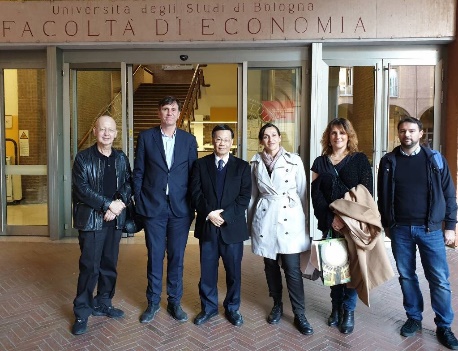 A group photo at the University of Bologna of AU President Jeffrey J.P. Tsai (third from the left), Prof. Michael McAleer (first from the left), Professor Giorgio Bellettini (second from the left), Director of the Department of Economics, Professor Elisa Montaguti (third from the right), Prof. Luca De Angelis (first from the right), and Prof. Maria Elena Bontempi (second from the right) Continuing the internationalization efforts, President Jeffrey J.P. Tsai of AU signed MoUs respectively on November 5th and the following days with Complutense University of Madrid, a school with 725 years of history, Real Centro Universitario Escorial-Maria Christina and University of Bologna, believed to be the very first founded university in the world. All three are highly recognized and leading academic institutions in the world. AU is a step closer to world-class student exchange collaborative programs, summer short-term studies, and teaching faculty joint research. Students at AU now have even more diverse opportunities to excel in their academic performance and specialties. President Jeffrey J.P. Tsai and Chair Professor Michael McAleer visited three well-known institutions in Europe in order to strengthen AU’s internationalization in academics. The first university they visited during the trip was the Complutense University of Madrid, one of the oldest universities in the world, as well as the largest in Spain. The university currently has 86,000 students enrolled, offers 230 degrees, and possesses more than 30 libraries. This year, the university was ranked 206th out of 26,000 universities evaluated in the prestigious annual QS World University Ranking, placing Complutense among the top 1% of elite Higher Education institutions. For employability and academic reputation, Complutense is ranked 92nd and 94th, respectively. Its alumni comprise 7 Nobel Laureates, and Albert Einstein was once a faculty member there. These all shows the school’s significant status. President Tsai was received by Professor Carlos Andradas Heranz, the rector, to sign an exchange of Memorandum of Understanding (MoU), initiating a blue print for future collaboration. President Tsai visited the RCUEMC the following day. RCUEMC is a private higher education institution attached to the Complutense University of Madrid. It is situated in an extraordinary area and fabulous surroundings. The institution’s campus is part of the Royal Monastery of El Escorial’s astonishing architectural monument complex founded by King Phillip II in the 16th century. This provides a particularly beneficial atmosphere for studying. Under the MoU signed by Rector Marceliano Arranz Rodrigo and President Tsai, students from AU can now also enjoy studying in this magnificent campus. The final stop of the trip, University of Bologna in Italy, takes this academic collaboration journey to a perfect ending. University of Bologna is considered the oldest university in the western world. It was widely recognized as “Alma mater studiorum”, honoring the university as the mother of all universities. Founded in 1088 (with a 930-year history), its history is intertwined with profound science and literature, making the university a keystone and point of reference for European culture. It remains to be one of the most dynamic and internationalized universities, taking an active part in the Socrates Program, an educational initiative to create synergy among European schools, promoting mobility, innovation, and equal opportunities throughout education. In term of its world ranking, the 2019 QS World University Rankings ranked the University of Bologna as 180th in the world. You will also be amazed by its diverse university museum resources, including the museum of astronomy, the zoological collection, anatomy collections, and more. Forbes magazine once evaluated it as one of “the world’s most beautiful college campuses.” President Tsai indicates that it is quite a privilege that an 18-year old school, Asia University, has the opportunity to cooperate with the oldest university in the world. To strengthen these close ties, an agreement of cooperation has been signed by President Tsai, Professor Giorgio Bellettini, Director of the Department of Economics, and Professor Elisa Montaguti, representing the Department of Management. The agreement is a milestone for AU, offering a clear mechanism and enabling more positive student exchange and joint-research with University of Bologna in the near future. 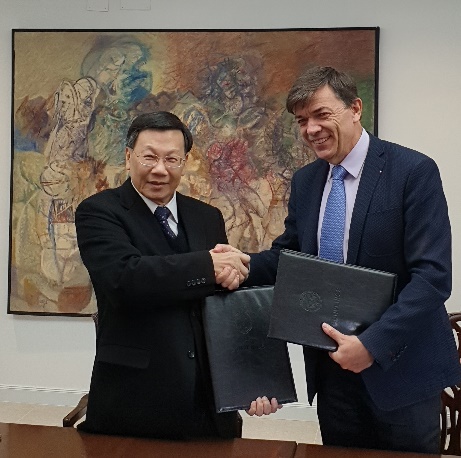 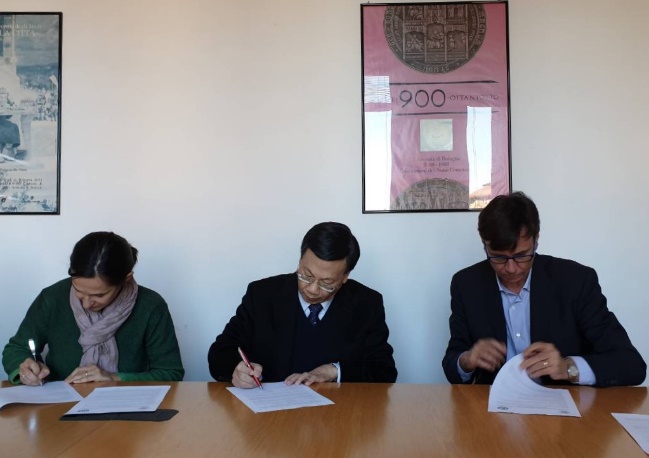 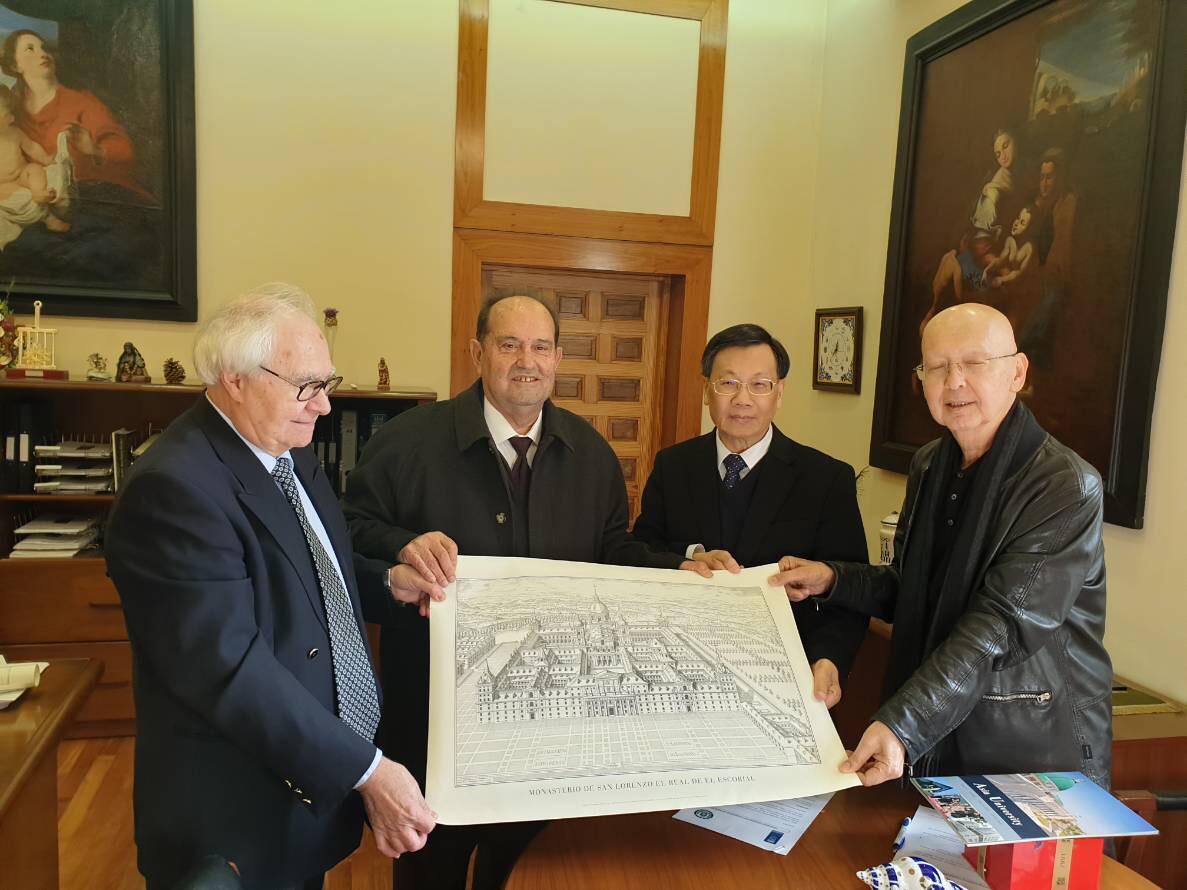